As a teacher I was always looking out for new tools that could help improve the learning environment in my classroom as well as help me help my students more efficiently and effectively.  I have tried out many gadgets with a goal of finding out how they can improve something in the classroom or if they are just a gadget that gets in the way.  Wearables are starting to show up big time and they have the potential to improve various aspects of our lives but some of them are too costly or just do not add enough to the experience.  I bought my first smart watch last year when the Pebble came out in stores and just got my newest smart watch, the Samsung Gear Live (an Android Wear smart watch) this last week.  I really enjoyed having my Pebble for the last year and was very curious as to what this new batch of smart watches would bring to the table.  (The impact on the classroom part is at the end since it is the most important.)

The Software and Apps

The Rest of the Features

The Gear Live also includes a heart rate monitor and has a step counter that works in the background, both are missing from the Pebble watch.  The Gear Live does have one button on the side, something the other Android Wear watch out right now is missing, but most of the input is through the touch screen.  I found the Gear Live getting more random inputs by brushing against something or when my son reaches for it, something that didn’t happen with the Pebble but that was the difference between a touch screen and not.  The vibration feature of the Pebble was more noticeable than the Gear Live but this may be something they can change later by making it vibrate for longer.  The rest of the features are not too big of a deal, except for the watch band.  I am not liking the watch band for the Gear Live as it has a different clasp than I am used to and I am afraid of it falling off so I switched it for the Pebble band as I keep looking for a better one.

I loved my Pebble smart watch but I am also loving my Gear Live so far and I see more potential with the Gear Live due to the touch screen inputs and the color AMOLED screen.  I will not be getting rid of my Pebble as it is definitely a better device if I need something that lasts more than a day and can handle more immersion in water.  I can see wearing my Pebble when swimming in a pool or some other time that I will go beyond the 1m of water depth allowed with the Gear Live.  I also see the Pebble as being a little stronger since it does not have a touch screen when I want to wear it while doing yard work or anything else when I am afraid of something smacking into it.  The prince points were not too far apart, $150 for the Pebble and $199 for the Gear Live, and both were birthday presents, just a year apart.  As with any piece of tech, you have to pick the device that has the features that best fit the need you have at that time.

Impact in the Classroom

As a teacher, having a smart watch is a way you can be more connected than before.  Getting notifications from email or other apps allows you to easily see when people have questions or if something needs your attention.  I always tried to avoid pulling out my phone in the classroom but when I became a father, that phone was a connection to my son through whoever was taking care of him at that time.  If daycare called and he was sick, I only had an hour to get him so I need to know that right away.  Just looking at my watch instead of pulling out my phone makes things a lot more efficient and less intrusive.  Over the last year I was able to see emails as they came in and was able to see if someone needed to see me so that I could head straight there instead of needing to open the email on my phone or computer.  I was able to get notifications from Twitter or my website rapidly which meant I was better able to respond.  I enjoyed being connected and this allowed me to react more quickly to issues or know right away if I needed to respond to that email or not.  Again, I see a lot of potential and as wearables become more and more common in the classroom, they can become a useful tool as long as you know how to make it useful.  We should not fear them when students bring them in but we should be aware of what they can and can not do.  While it is possible for a student to send a message to another student and have that pop up on their watch, that is not going to be the main purpose or the common purpose of that device.  While this could be used for cheating, I think that becomes something we can easily address and even deter with better assessments.  I think most of the cheating that people fear with the increased use of technology can be removed by developing better assessments that better measure learning as opposed to all multiple choice assessments which can be cheated on more easily. 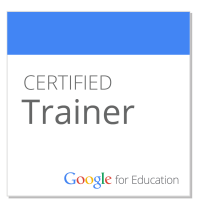